I develop statistical methods to study evolution and extinction in the fossil record. My main research areas include the following topics:

Mass extinctions and the Signor-Lipps effect. When a collection of taxa (e.g., species of dinosaurs or ammonites) are killed off simultaneously in a mass extinction, their last occurrences in the fossil record may nonetheless give the impression of a gradual extinction, due to the incompleteness of the fossil record (the Signor-Lipps effect). I develop methods for testing whether a mass (sudden) extincton has occurred, and for estimating the position and duration of such an extinction. I also study the related topic of placing confidence intervals on stratigraphic ranges, i.e., estimating the time of extinction of a taxon based on its fossil record. 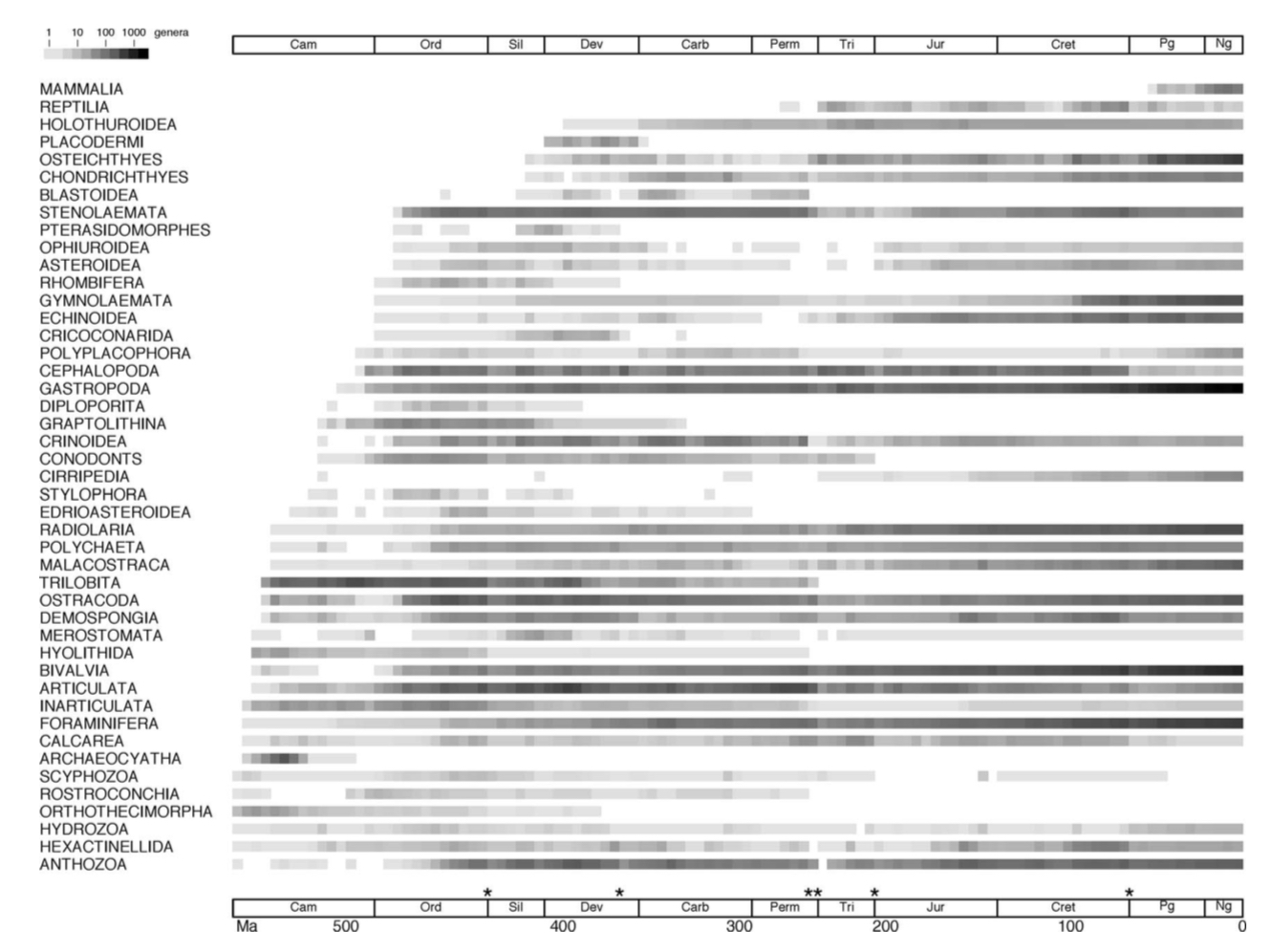 Macroevolution. Using statistical analysis and paleontological databases, I study large-scale questions about the history of life. For instance, with Zoey Werbin '17 (now at Boston University) and other collaborators, I am currently investigating whether modern extinctions are more similar to background extinctions known from the fossil record, or to mass extinctions. Other examples: with Andrew Bush of the University of Connecticut, I examined whether observed extinction rates in mass extinctions are a reliable guide to the severity of the triggering mechanism. That is, does a higher extinction rate indicate a more severe cause, or can factors such as Simpson's paradox make such an inference misleading? With Peter Dodson of the University of Pennsylvania, I estimated how many kinds of dinosaurs ever lived, and whether dinosaurs were already declining before an impact at the end of the Cretaceous Period caused their ultimate extinction.

Evolutionary trends. Large-scale trends in the history of life (such as increase in body size, a.k.a. "Cope's Rule") may be a result of driven mechanisms (e.g., selection) or passive mechanisms (e.g., diffusion away from a lower bound). Several tests have been developed to categorize a trend as either driven or passive, but real trends are likely to be a combination of both types. I work on methods for modeling such trends and quantifying the extent to which a trend is a combination of driven and passive trends. With Jon Payne and Noel Heim of Stanford and other collaborators, I also study trends in animal body sizes over time.

The tempo of the Cambrian explosion. The Cambrian explosion was a key event in the history of life, in which representatives of most phyla (animal body plans) first appear in the fossil record. With Susannah Porter and John Moore and of UC Santa Barbara and Adam Maloof of Princeton and other collaborators, I am working on developing a statistically rigorous timeline of Early Cambrian originations, accounting for a number of possible biases such as dating error and incomplete fossil sampling. This problem is analogous to the Signor-Lipps effect in mass extinctions, but in the reverse direction.

I have also worked on a number of other topics in palebiology; see my publications for other examples.